Crux of the problem

“Why would someone kill innocent civilians?

Who are the people who get involved in terrorist attacks?

What kind of personalities and philosophies do such people have?

The four questions asked by Dr Sohail, are more relevant today than they were a decade ago, when the author first raised them in an article.

A clinical psychotherapist by profession, Dr Khalid Sohail runs his practice in Southern Ontario, Canada. In the international psychotherapy circles, Dr Sohail is widely known as the creator of the “Living in your Green Zone” method, which has cured hundreds of patients suffering from various mental disorders.

Being a peace-loving humanist, he has valued life a lot and wondered why an individual would blast himself in a crowd of his fellow humans. He would carefully read the suicide notes, the biographies of suicide bombers, and watch with keen interest the interviews of their family members, to get deep into the psyche of such adventurers.

The first chapter of his book, From Holy War to Global Peace: Essays on Suicide Bombers, Guerrilla Warriors and Peace Makers deals with the psychological makeup of a suicide bomber, and tells us in detail how the problems of religious identity, anger against imperialistic powers, and disillusionment towards political leaders, create that acute sense of helplessness and desperation in the Muslim youth, that makes them attractive targets in the eyes of guerrilla leaders who are always looking for new recruits.

“Many younger Muslims” says the author, “gravitate towards a cultish leader they meet in person or watch on television. Once young men have volunteered their lives for the cause, their leaders wait for the right moment to send these dedicated followers on a suicide mission. Obviously, the suicide bombers don’t see themselves as committing suicide, which is forbidden in their religion, they are led to believe that they are embracing a sacred martyrdom. …When you ask them why they kill innocent civilians, they rationalise by saying that the leaders of these governments are elected democratically, therefore supported by the masses, so the latter are indirectly responsible for the wrongdoings of these leaders.”

After analysing the suicide bomber’s mindset, he reviews briefly the psyche of organisations and leaders like al-Qaeda, Osama bin Laden and Sayyid Qutb, the radical Egyptian scholar, executed by Gamal Abdel Nasser, in 1966. He quotes from Qutb, “It is the nature of Islam to dominate, not to be dominated, to impose its law on all nations, and to extend its power to the entire planet”. Dr Sohail then compares this statement to the viewpoint of Maulana Maududi: “Islam wishes to destroy all states and governments anywhere on the face of earth which are opposed to the ideology and program of Islam.”

Dr Sohail explains that many leaders and followers of al-Qaeda belong to the Salafi sect, which dreams of implementing Islam as it was practiced by their Aslaaf (forefathers) in Arabia some 1500 years ago. That movement was revived by Muslim scholars like Ibn Taymiyyah (1263-1328) and Abdul Wahab (1703-1792) who believed that Muslims had lost the centrestage in the world because they had forgotten the teachings of Quran, and if they reverted back to the Islamic way of life they could regain their dominance in the world.

After giving this background, the author comes to the modern world and tells us about the political struggle of Nelson Mandela, Che Guevara, Mao Zedung, and Menachem Begin — all individuals who played a major role in the making of the twentieth century politics. At this point, Dr Sohail provides us an opportunity to examine the stark contrast they represent against the contemporary Islamist movements of al-Qaeda, Taliban and Daesh etc. 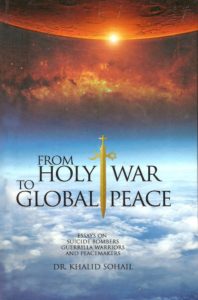 The author points out that the struggles of Nelson Mandela and Mao Zedung were directed towards certain political ends and their armed struggles also came to an end when those targets were achieved, but the Islamists won’t stop, say, after liberating Kashmir, or invading Afghanistan or establishing an Islamic government in Pakistan. Their fight will continue till the whole world is invaded. That is the basic difference between jihadism and the politically inspired movements of the twentieth century.

The author pays special tribute to Khan Abdul Ghaffar Khan and Kofi Annan for their peace efforts in their respective fields. In the concluding chapter Dr Sohail insists that the concept of peace should not be limited to political stability: it encompasses the economic peace, social peace, and human rights as well.

This excellent study of the most crucial problem of our times is lacking only in one thing: there is no index of names or subjects at the end. The editors may like to add a comprehensive index in the next edition.